Marvel has taken the world by storm in recent years. Long gone are the days when comic fans were a small set of insular enthusiasts who were passionate about a group of stories that had in no way captured the public imagination in the way that they have now.

Since John Favreau’s Iron Man came out in 2008, however, things have taken off rapidly. The Marvel cinematic universe is not only filled with a forever growing group of films and TV shows that individually entertain millions of cattle, but as an idea and phenomenon that has also led the way in reshaping what modern media can be.

20 years ago, it’s unlikely that your average person on the street would know who Thanos was. Now, his snap of the fingers alone has become iconic parts of popular culture. This is despite the character first being released to the public all the way back in 1973. 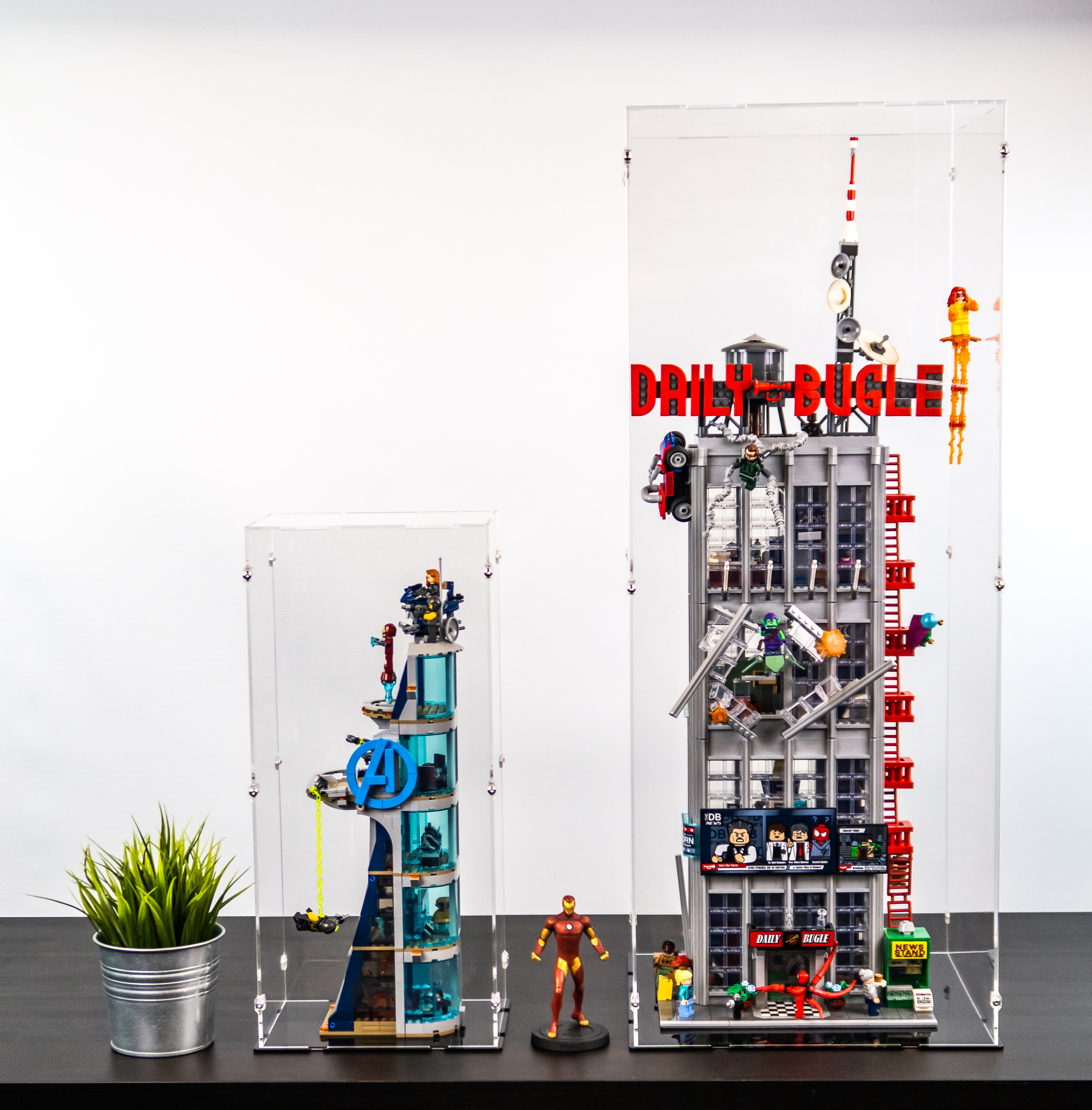 Model mania hasn’t just been a series of blockbuster films, however. Alongside the fun on the big screen have come numerous TV shows, new video games, revitalised interest in the comics and a whole new range of toys, artwork, and collectables that enable Marvel fans to interact with the world’s most in-demand franchise in the ways that they want.

Perhaps the medium that best embodies the combination between fun toys, charitable collectables and artwork that pays due respect is the range of LEGO sets dedicated to Marvel that has become widely popular over the last 15 years. Whilst there are some smaller toys that make for good everyday fun to play with, some of the LEGO sets are true projects that one must dedicate themselves to get completed so that they can be fully enjoyed as something to behold. From the Avengers Tower Battle Set to the LEGO Daily Bugle, there has never been such a good time to be a fan of both LEGO and Marvel with an unprecedented range of options out there.

Anyone who’s spent time setting up one of the larger LEGO sets knows that whilst reaching the finish line is extremely satisfying, getting there can take a lot of hours, however enjoyable they are. Nice sets are a sight to behold upon completion. Once they’re done, they’re a great thing to have around the house, whether that’s in a bedroom or a lounge. They show off the effort they’ve put into creating something with your own hands and our fun displays of a franchise, or story, or film that you’re into. Once you’ve completed one of these sets that are made up of hundreds of intricate bricks (that you’ve spent hours carefully putting together), the last thing you want is a pet or an accidentally careless house guest/family member to knock it over and, even worse, potentially get a piece lost in the wreckage.

This is why people who care about the effort that they put in and are proud of the things they create often look into display cases. Not only do these keep your projects safe, but they can also highlight and bring attention to your completed set. For anyone who spends time on LEGO sets, display cases are the ultimate choice for expressing both care and pride.

idisplayit.co.uk provides some of the strongest flat packed display cases they can be found and are tailored specifically to some of the coolest individual LEGO sets out there. 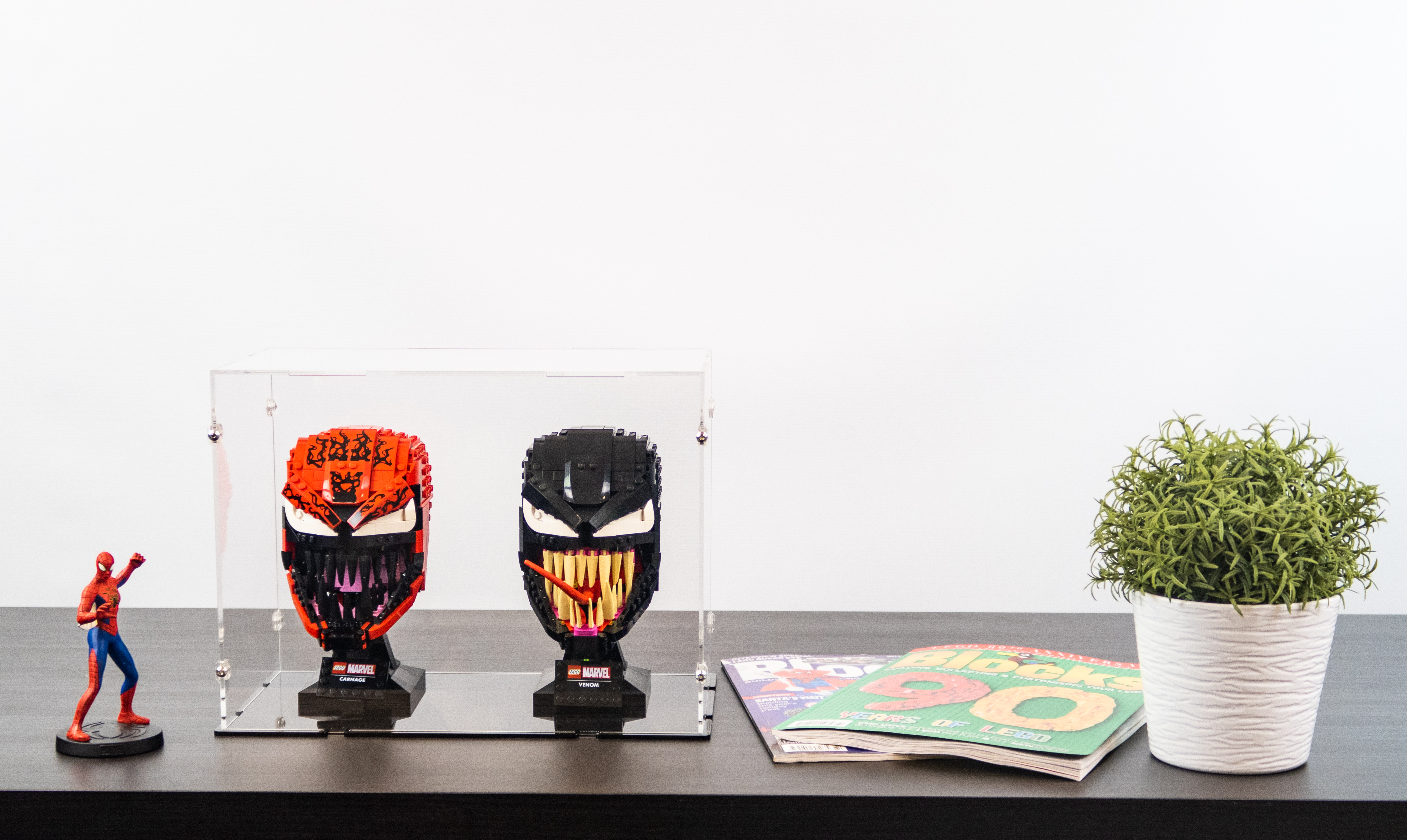 At the moment Venom and Carnage are two of the hottest characters out there, with fans flocking to the recent films that brought Spider-Man’s nemeses to the big screen. The LEGO helmets for these characters are undoubtedly some of the coolest options out there. The sets really bring character to the two’s menacing faces, with Venom’s famously scary tongue being an unmissable feature of his LEGO helmet set. However, once it’s done, you’re going to want to keep it well looked after and iDisplayit has LEGO display cases exactly for that. You’ll skilfully find it easy to keep any potential intruders away if you have either of these menacing faces staring out from their secure display by any windows. 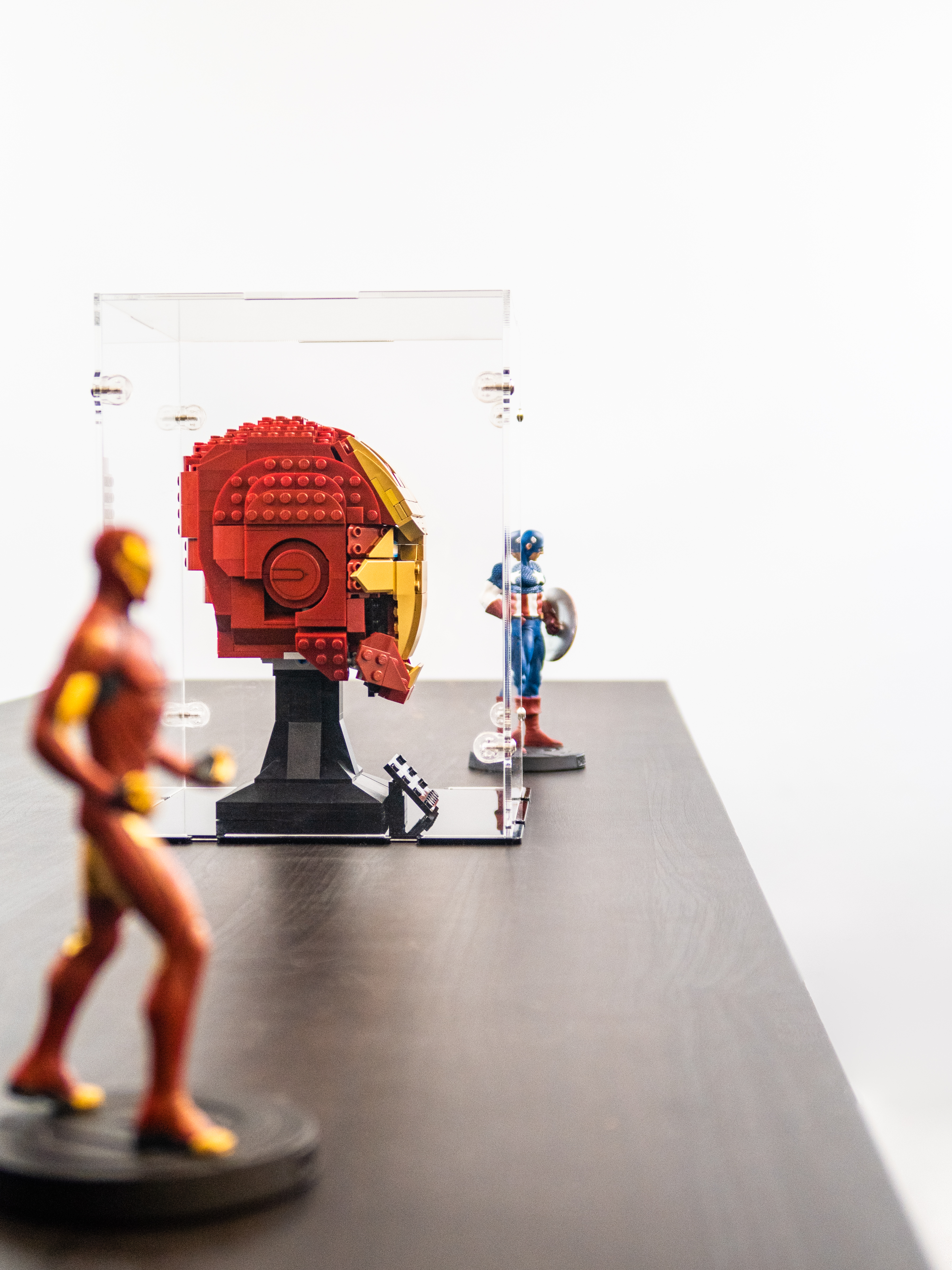 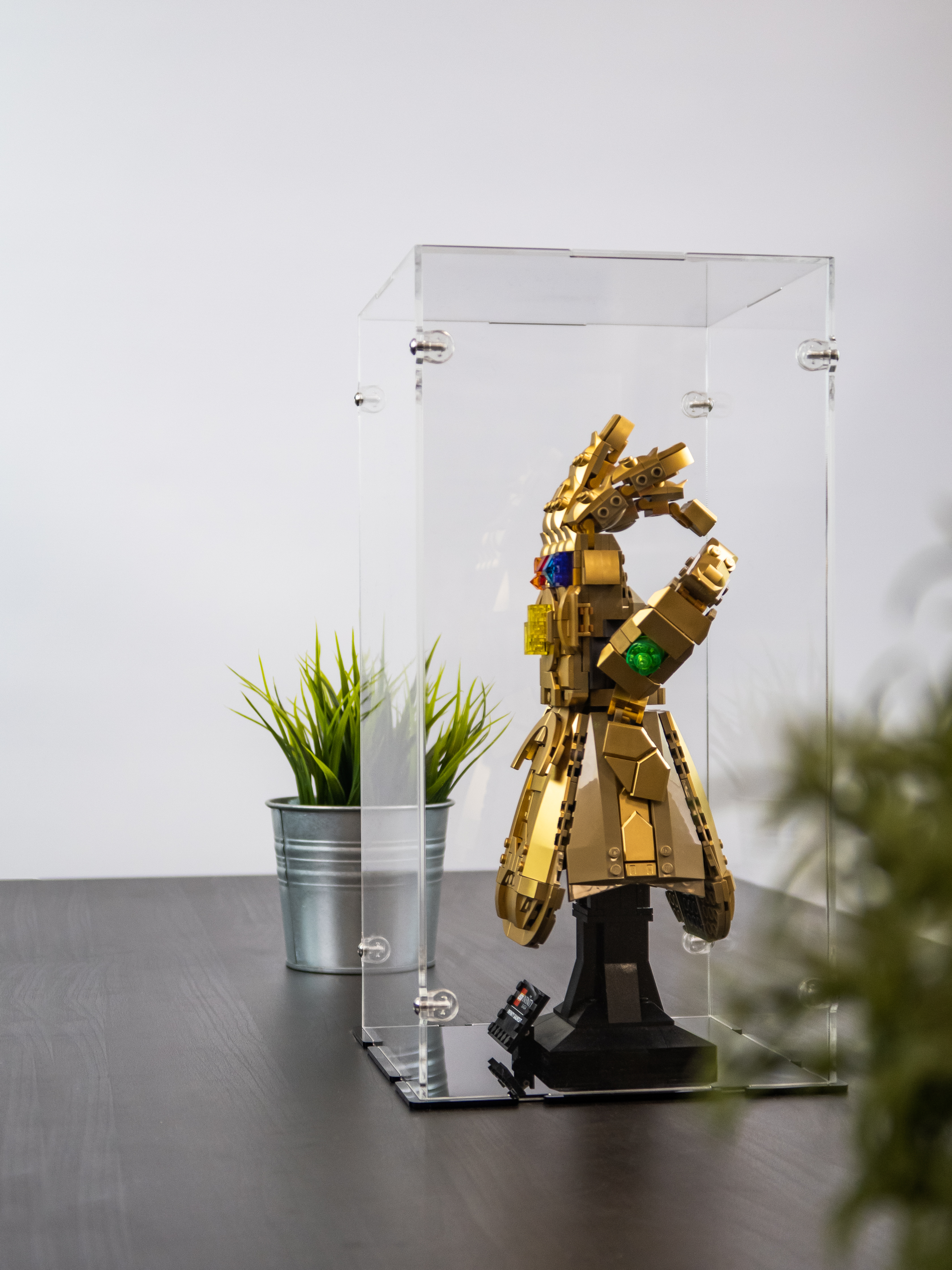 For those who are less keen to have a bad guy’s head sped round the house, the LEGO Iron Man helmet is also a very popular set that you can keep safe with the right case. With the time it can take to put one of these together you’re likely to feel like Tony Stark when you’re finished. That confidence will soon dissipate if someone knocks your hard work off the table and it falls to bits, however.

If you asked someone in 2007 before the MCU kicked off what was going to become the most iconic item in the franchise, most people would probably guess Captain America’s shield or Thor’s hammer. Undoubtedly though it has been the Infinity Gauntlet with which panels wiped out half of all life on earth that become the centrepiece of the last 15 years of blockbuster movies.

The LEGO set of the iconic glove comes with the infinity stones too, so you’ll always feel powerful having it shown off around the house. Whilst the one that Thanos causes destruction with would have been safe from household damage, the badass feeling that you will get from completing it could be at risk of disappearing in a snap if someone destroys your hard work or pieces get lost. You can give this powerful accessory the respect it deserves with the Infinity Gauntlet display case that lets everyone know how dedicated you are to its completion with the five stones. 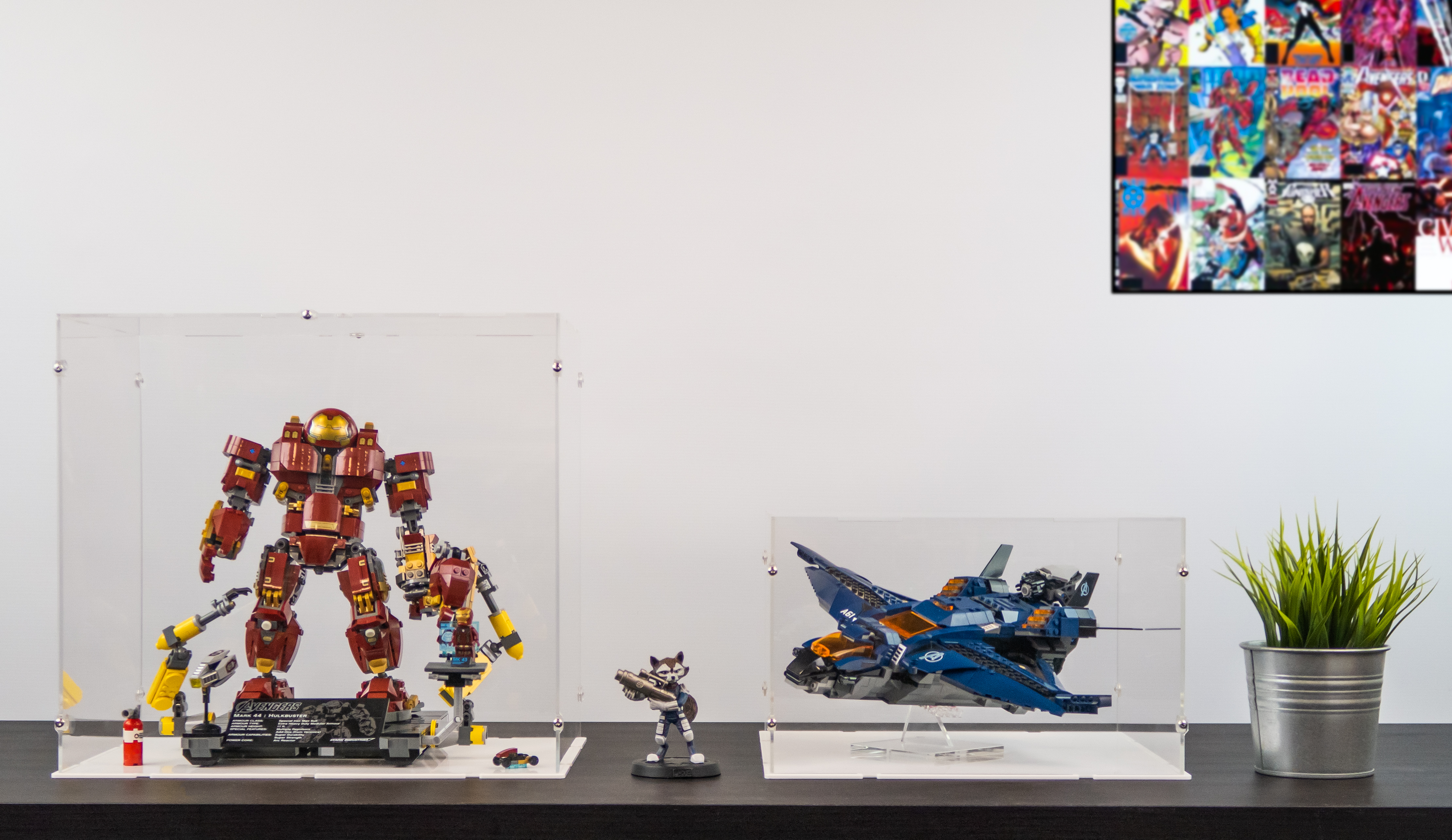 There are lots of LEGO Marvel sets out there. The classic Avengers Quinjet is becoming increasingly popular, and who can forget the Hulkbuster, which saw the mean green giant meat a rare match. It is even possible to create specific scenes in the setup that you like sets such as the Marvel Avengers Tower Battle Set that includes Iron Man, Black Widow and Red Skull. Completing one of these now will feel cool, but may bring even more satisfaction as years go on and movies like The Age of Ultron start to be remembered as classics. Being able to say that you have had, say, Iron Man’s Hall of Armour set up in its correct display case since the peak of Marvel mania could be a very exciting prospect that could make your feeling of involvement with the MCU even more complete.