The only thing more exciting for Harry Potter fans than the prospect of five new summer LEGO sets might be a letter arriving by Owl Post inviting them to study at the famous school of witchcraft and wizardry. But that seems about as likely as a local pub serving Butterbeer on tap – so for now, fans will have to make do with a host of enchanting new LEGO sets which feature a variety of iconic characters and settings from the series.

LEGO has an established history of providing intriguing sets for the wizarding world, starting way back in 2001 with the film release of Harry Potter and the Philosopher’s Stone. Since then, we have seen models be created for all films in the franchise. The most recent set announcements include the Hogwarts Moment and 20th Anniversary ranges which coincided with the anniversary of the series in 2021. The latest releases for 2022 fall under Hogwarts Moment and 20th Anniversary subthemes, with a vivid and varied assortment of set pieces to bring the magic into your own home.

Which New LEGO Harry Potter Sets Have Been Released for June 2022 and How Should You Display Them?

The hidden headquarters of the Order of the Phoenix is an easy contender for the most innovative of the new sets. In the film, the entrance to Sirius Black’s home is hidden between the façade of two ordinary townhouses. The LEGO model accomplishes this effect by allowing the two houses to slide apart to reveal a hidden grey exterior. The neatly detailed lampposts to either side also serve as handles to pull the two sides apart.

There are several standout details on the reverse of the set, which features a variety of rooms. The best of these has to be the tapestry of the Black family tree – as seen below – which adapts the human faces of Sirius’s ancestors into LEGO form.

For such a detailed set, collectors should look at purchasing an iDisplayit custom-fitted display case to keep the interiors free from dust and damage.

This set represents the first time the iconic Ministry of Magic has been released as a LEGO set piece, and it doesn’t disappoint. The diorama focuses on the scene in Harry Potter and the Deathly Hallows where the heroic trio infiltrate the corrupted ministry to recover one of the Horcruxes from Dolores Umbridge.

The eye-catching centrepiece is the Atrium’s overhanging arch, complete with a banner that hangs over the golden fountain statue below. The build includes several detailed interiors, including the Hall of Prophecy, the Court Room and Dolores Umbridge’s office. Our personal favourite has to be Arthur Weasley’s office, which is stuffed full of muggle trinkets and paraphernalia such as a clock, kitchen utensils, and the all-important rubber duck!

The set includes nine minifigures: Dolores Umbridge, Corban Yaxley, Pius Thicknesse, Harry Potter, Hermione Granger, Ron Weasley, Mary Cattermole, Arthur Weasley and a Dementor. It is great to see several lesser-known characters included, with special mention to the epic Dementor figure that seems to float above the ground in its rippling black cloak. The heroic trio can also use their Polyjuice potions to ‘transform’ into Albert Runcorn, Mafalda Hopkirk and Reg Cattermole, by way of multiple faces, torso and hair appearances on the individual figures.

Collectors can purchase an iDisplayit custom high-quality acrylic case to protect the set while on display.

This set oozes atmosphere, with the twisting boughs of the willow tree and the ramshackle wooden shack masterfully recreated in plenty of detail. Sirius Black, Peter Pettigrew and Remus Lupin all appear as minifigures, complete with their Animagus forms: a werewolf, dog and rat. Alongside them stand the heroic trio, recreating the climactic confrontation from Harry Potter and the Prisoner of Azkaban.

This set is very aesthetically pleasing, especially when displayed as a diorama using an iDisplayit display case – see our favourite layout below. 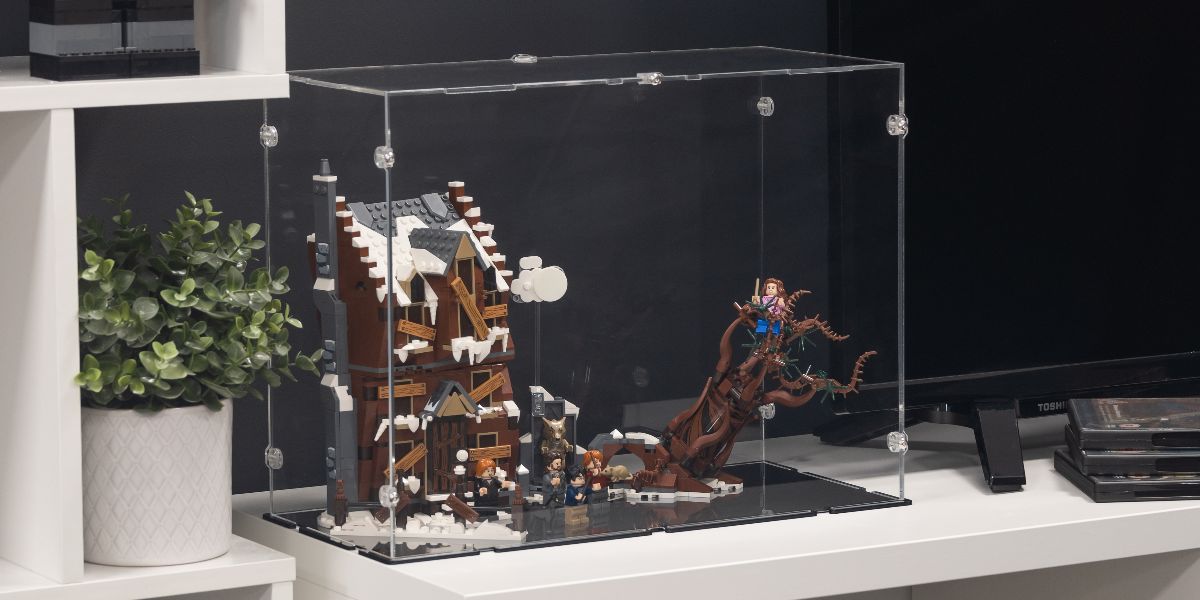 This is the first of the new sets to feature a section of the famous Hogwarts castle, recreating Sirius Black’s escape from the prison cell located in one of the school’s high towers. It is also part of LEGO’s ‘magically modular’ sets that combine to form Hogwarts castle in its entirety, offering an engaging creative endeavour for collectors.

The colour scheme of the castle is stunning, with yellow-grey brickwork and teal roof sections. The internal also includes a classic twisting staircase and fun curios such as a candle and Harry’s famous Firebolt broomstick. In terms of minifigures, the set consists of Harry Potter, Hermione Granger, and Sirius Black; alongside the magnificent, winged Hippogriff Buckbeak, complete with moveable wings. 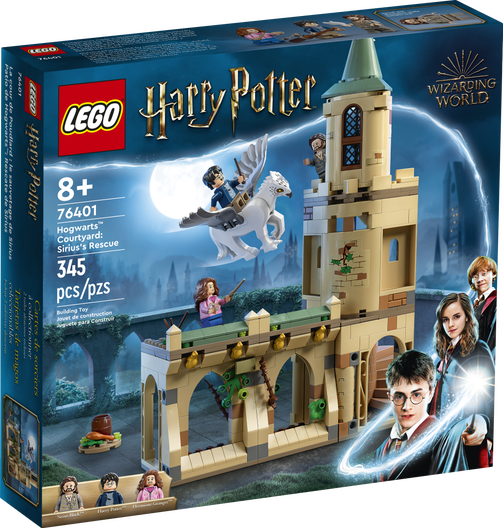 The Dumbledore’s Office set is also part of the ‘magically modular’ series but easily stands out on its own, packed to the rooftops with plenty of details and features. In terms of minifigures, the set includes Albus Dumbledore, Madam Pince, Harry Potter, Hermione Granger, Severus Snape and Argus Filch.

Out of all the sets, this has some of the most memorable and iconic props from the film including the mystical Sorting Hat, baby Fawkes the phoenix, the Invisibility Cloak, the sword of Godric Gryffindor and the Pensieve dish. The set is also built over four levels, uniformly showcasing the characters and rooms in smart detail.

Such a set shouldn’t be hidden away in a cupboard under the stairs but kept on display for all to see using the iDisplayit clear acrylic case. 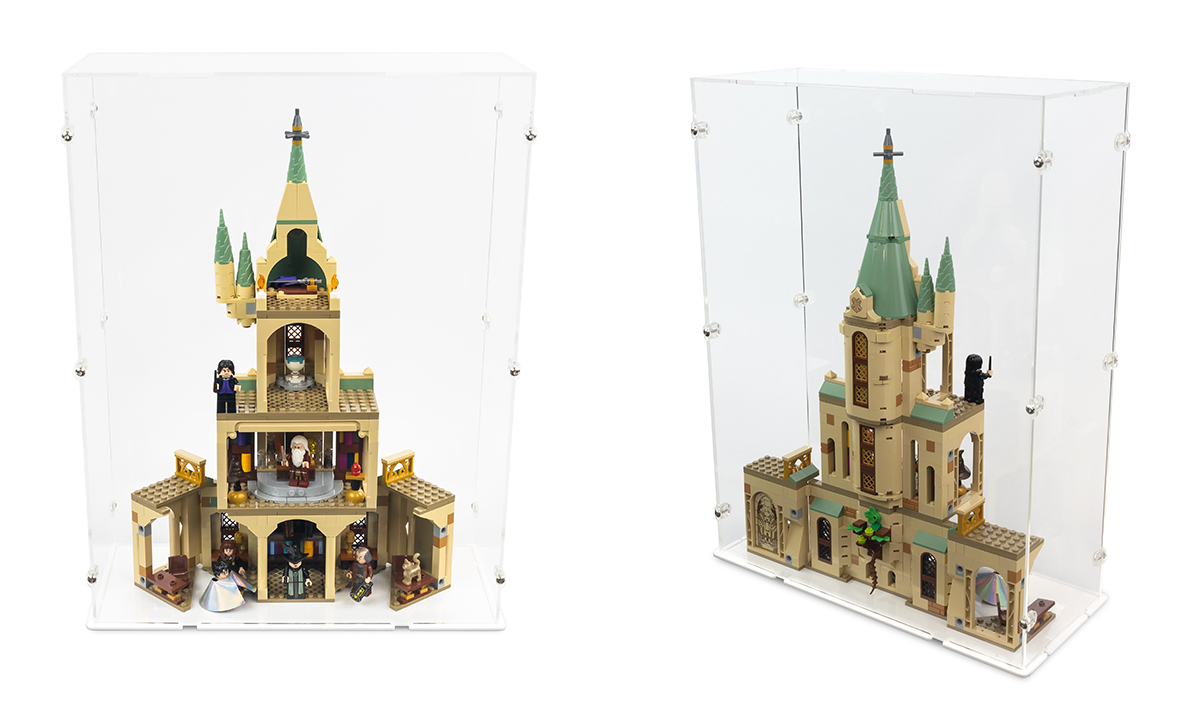 We love the new range of Harry Potter LEGO sets and can’t wait to see what else gets released in the future. But for now – mischief managed!