LEGO has been creating recognizable scenes, starships, vehicles and characters from Star Wars ever since the release of The Phantom Menace way back in 1999 heralded a new era for the franchise. But for Star Wars fans of all ages, the extensive array of droid characters remains one of the most endearing elements of the saga.

The first droids we met in a galaxy far, far away were in 1977’s Star Wars, where we were first introduced to the fussy, fastidious mannerisms of C-3PO combined with the unruly antics of his sidekick, R2-D2. We also witnessed several background droids such as the clunky Gonk (named for the sound it makes while lumbering around) and the cute ‘mouse droid’ which roamed around the decks of the Death Star.

Fast forwarding to The Empire Strikes Back and Return of the Jedi, we encountered iconic villain droids such as the Imperial Probe Droid, while the prequel trilogy introduced battle droids such as the Droideka and the B1-series. The sequel trilogy and various Disney+ TV shows have also continued to introduce new units. There has hardly been a Star Wars film or TV show where the heroes have not relied on a droid to save the day at some point – if anything, it has become a staple of the saga. 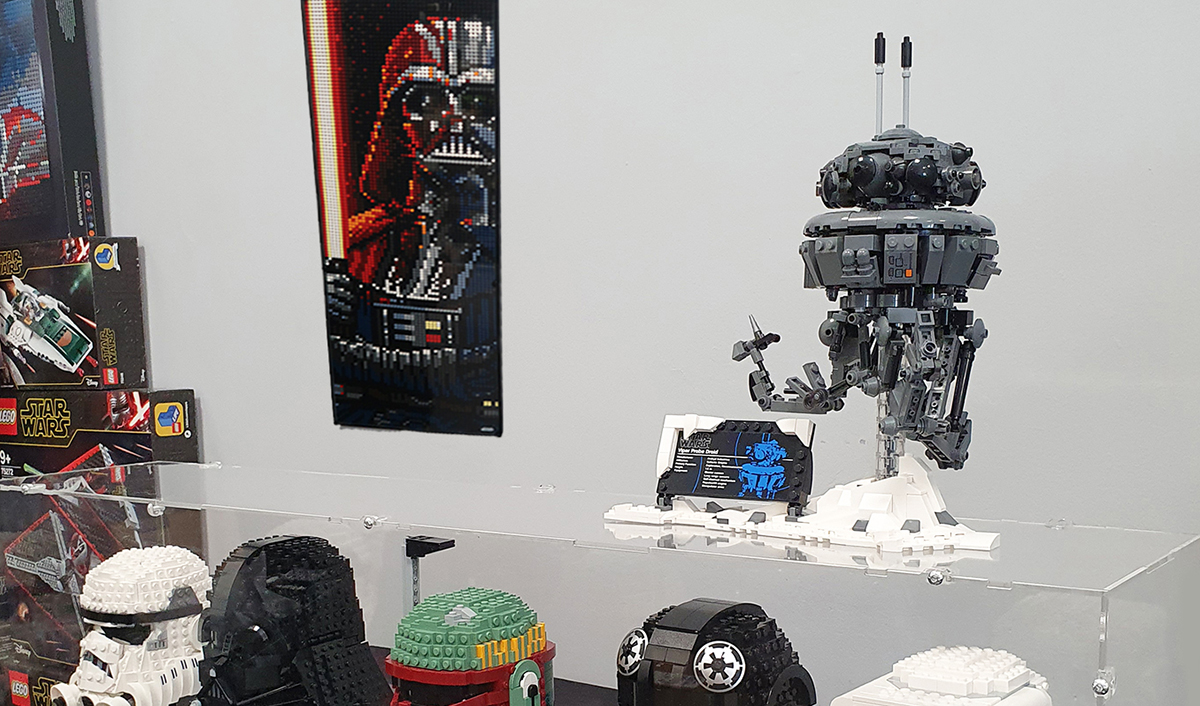 BD-1 (75335) is available to pre-order from the LEGO website and will be shipped on 1st August 2022 ready to join your collection. Make sure to also keep a lookout on the iDisplayit website for our high-quality acrylic display case to keep it free of dust and environmental damage.

BD-1 is the companion droid from the highly successful Star Wars Jedi: Fallen Order game on the console and PC. The game quickly became a firm fan favourite, offering players the chance to learn the ways of the force and train as a Jedi without distraction. It also holds a 9/10 rating on Steam, indicating the success of the game among the fanbase.

Both fans of the game and Star Wars as a whole will appreciate the chance to add this cute and effective exploration droid to their collection. The model features many authentic details, such as the inclusion of a compartment for stim canisters, in addition to the leg wiring, eyepieces and antennae. The droid’s default colour scheme from the game has also been recreated, producing a neat palette of red, grey and white brickwork.

LEGO Star Wars BD-1 represents one of the most original new droids designed for the saga in recent times, and we can’t wait for the LEGO model’s release in August.

What other Star Wars LEGO Droid Sets Can You Buy and How Should You Display Them? 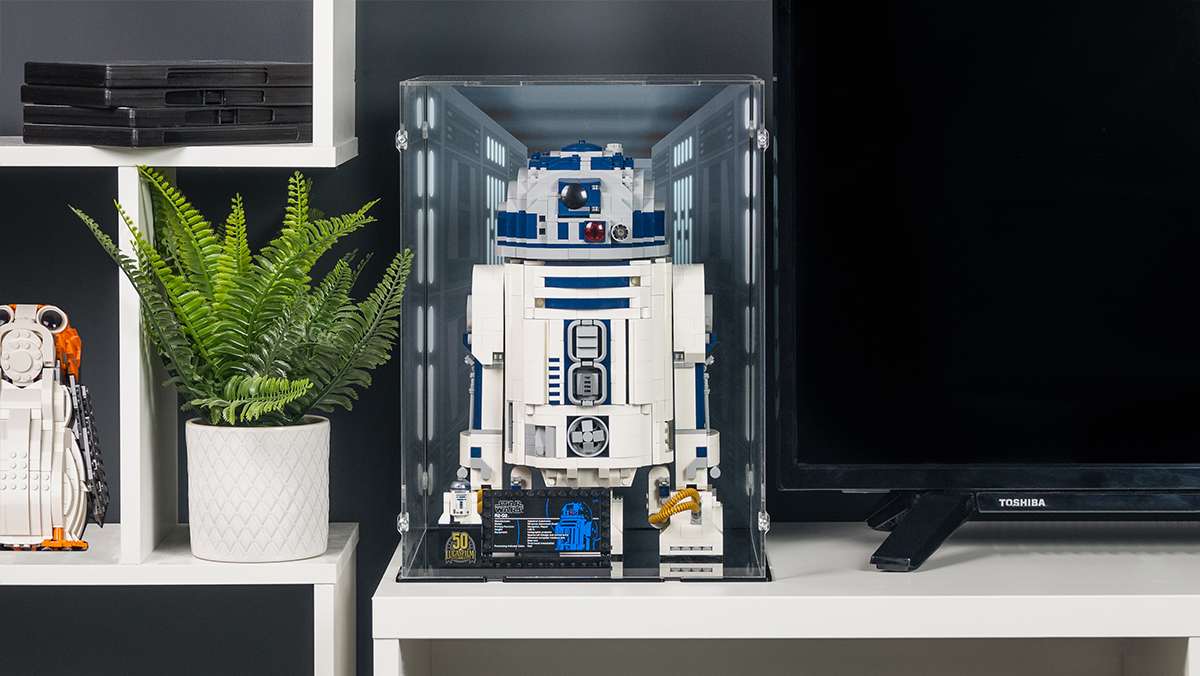 The beloved R2-D2 droid has been recreated in exquisite detail, with fully operating extendable front hatches and arms, in addition to the hidden compartment for Luke’s lightsaber from Return of the Jedi.

Purchase your custom acrylic case from iDisplayit to display the model in style at home. The case also includes an optional printed background as featured in the above image. 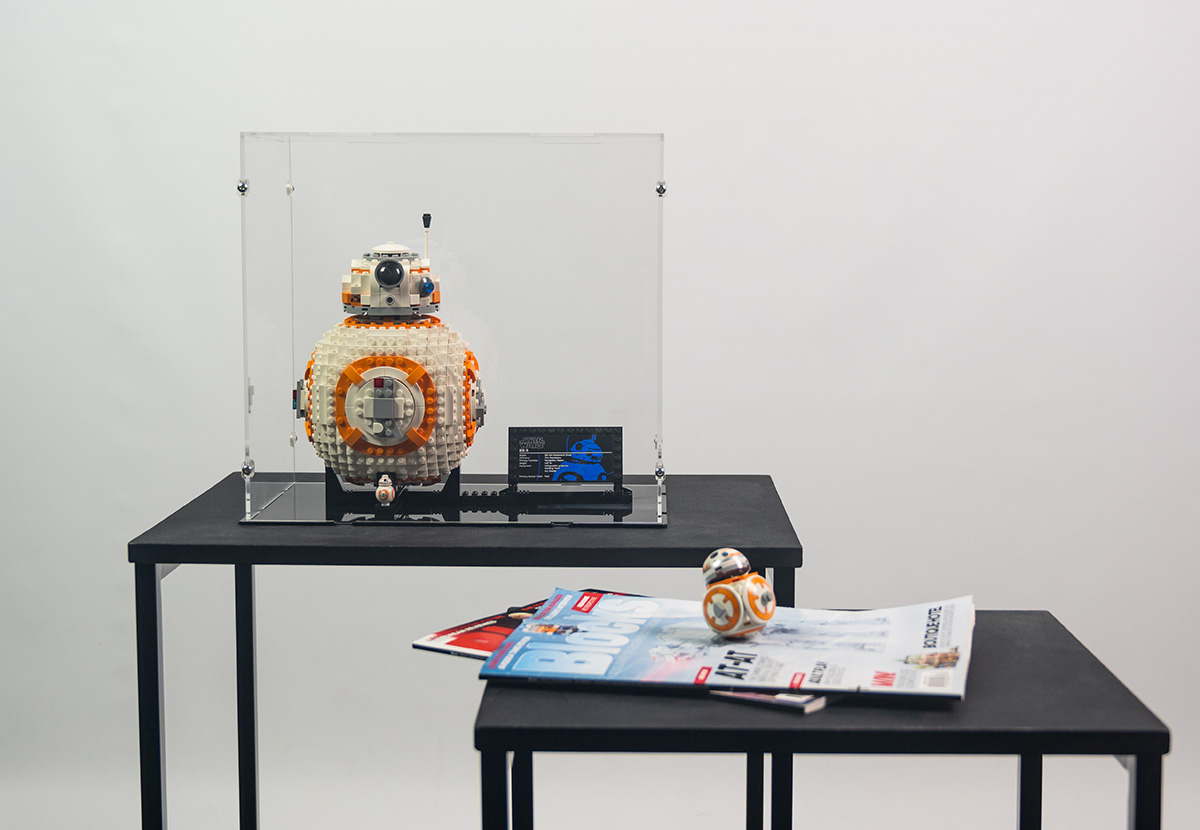 Star Wars fans all across the planet fell for the lovable ball-shaped droid BB-8 when it was first introduced in The Force Awakens. While the LEGO model does not recreate the droid’s famous rolling movement ability, the head does rotate. The model also includes an access hatch to extend the welding torch that BB-8 used to signify a ‘thumbs up’ in the film!

You can buy a custom display case through the iDisplayit website to protect the model from dust. 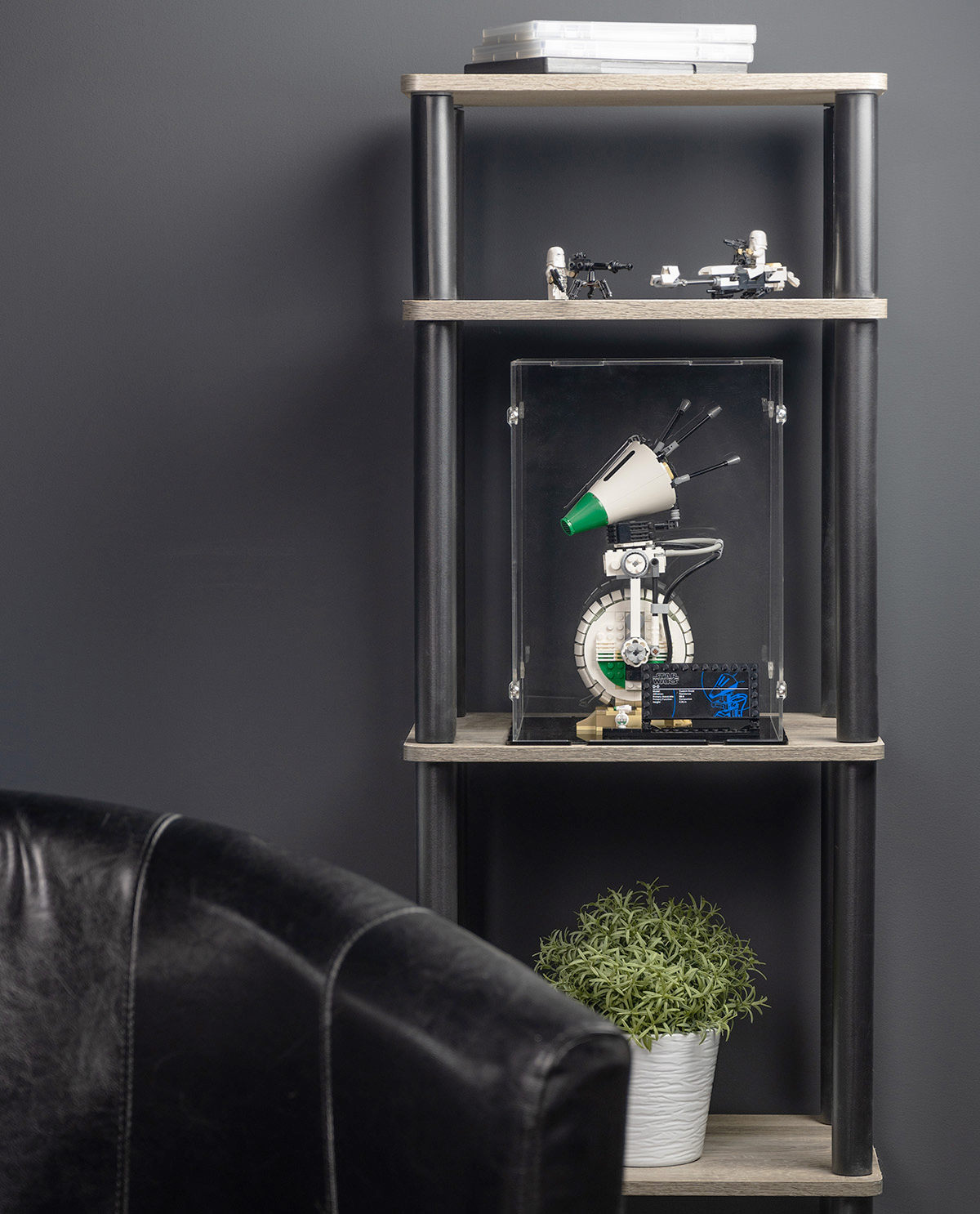 This cute newcomer was introduced in the most recent film, The Rise of Skywalker. The model faithfully recreates the details of the model with white, dark green and dark grey brickwork. The head also rotates a full 360 degrees, with posable antennae. The wheel doesn’t turn, but it does sit on a neat earth-coloured base.

Purchase our custom case through the iDisplayit website to display your model in a variety of locations at home. See the image above for some inspiration! 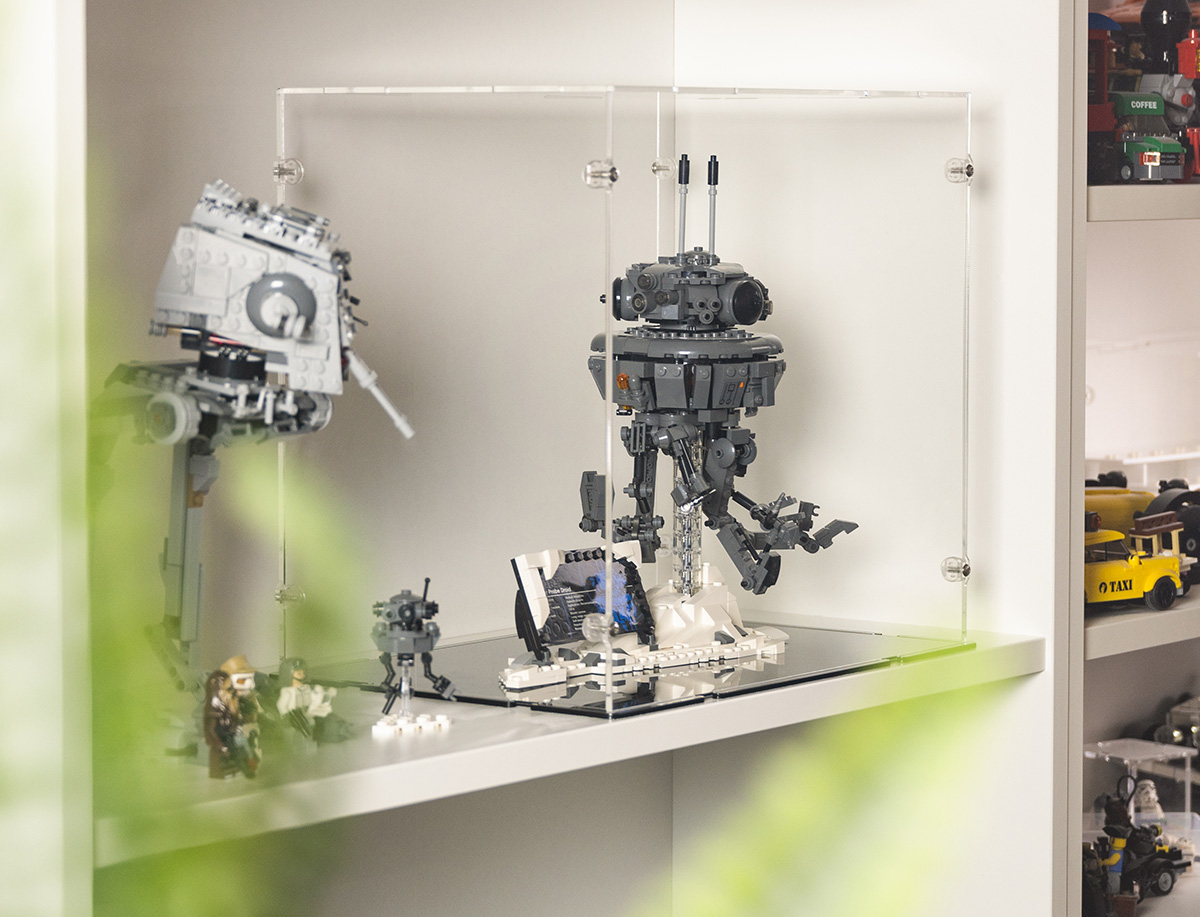 The Imperial Probe Droid is one of the most recognisable droids from the saga – having originally been based on concept art from the legendary Ralph McQuarrie – and perfectly encapsulates the brute order and efficiency of the Galactic Empire. The set recreates the droid’s mission on the ice planet Hoth, with a snowscape-inspired base and transparent pole to suspend it above the ground.

With so many narrow and hard-to-reach elements, the Imperial Probe Droid should be kept inside our custom display case to avoid dust contamination. 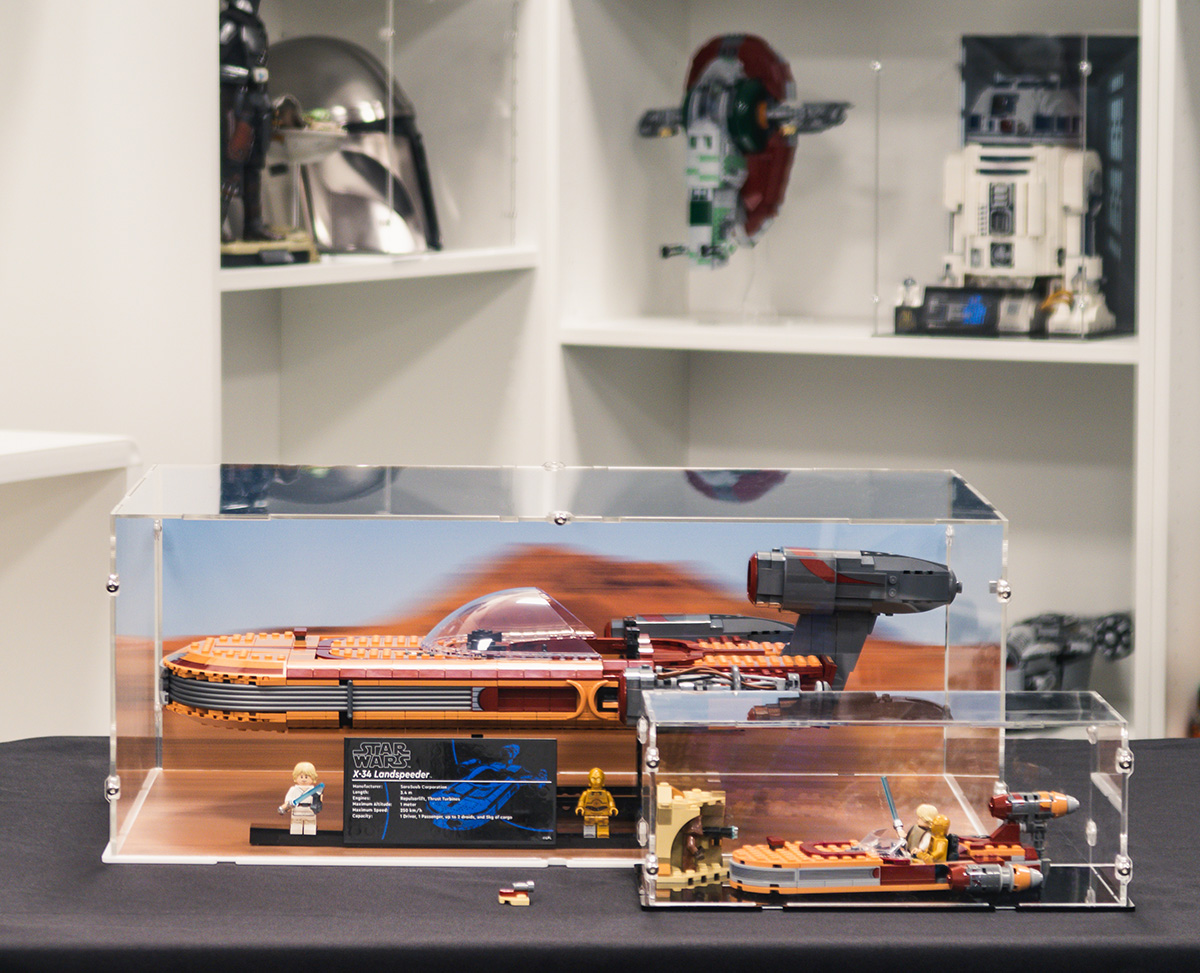 We’ll have all the latest news and previews on your favourite upcoming Star Wars LEGO releases, so stay tuned and updated through our blog.

May the force be with you!